With all the excitement surrounding the release of “The Last Jedi” (which I’m seeing this weekend!) my Star Wars obsession has once again been reignited and kicked into overdrive (as often happens!) so I decided to put together a little warmer-weather look book inspired by everyone’s favourite scruffy lookin’ nerf-herder.

Han Solo is, without a doubt, my favourite character in the Star Wars universe – while a lot of my friends growing up wanted to be Luke, and most people these days think Boba Fett is the ultimate bounty hunter (for some reason) for me, Han has always been the most interesting, most human, and simply coolest character in the franchise.

This is due in part to his outstanding costumes throughout the four films he appears in. The design is retro-futuristic with a heavy emphasis on practicality over form, while also giving a good insight into the character’s history and motivation. For me, the best version of the Han Solo look is his costume from “The Empire Strikes Back” which sees a slightly different take on the look established in “A New Hope” – this version sees his military inspired trousers change from blue denim, to a brown wool twill, his vest is replaced with a practical jacket (due in part, no doubt, to the colder weather the character has been facing) and a slightly revised ‘bib front’ shirt.

The use of colour in Star Wars is always brilliant and never more so here, personally, I love the way the ESB Han Solo costume sings onscreen, the colours gel perfectly and the look is so quintessentially Han that I always think of this one when I think of the character. 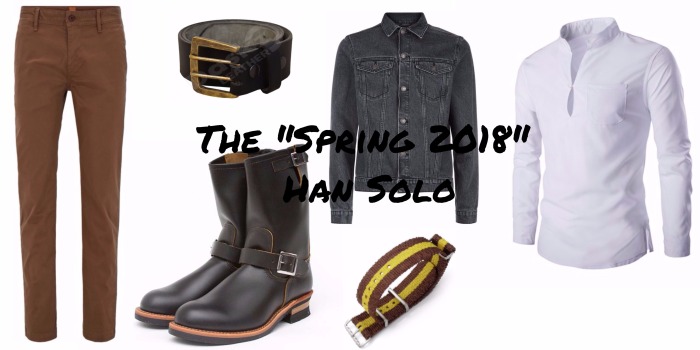 With a look as simple as Han Solo’s, its surprisingly tricky to boil it down to a wearable look, without also making it feel too stagey or costumey. I feel with this slightly 50’s inspired look I’ve managed to capture the rebellious essence of the character, along with the iconic silhouette of the ESB look, and make it a more wearable everyday outfit.

The trousers are a pair of slim fit tobacco coloured chinos from Hugo Boss but any darker brown chino would work as well. If you wanted to turn this look into one inspired by “A New Hope” you could always substitute these for dark blue chinos, or a pair made from denim if you’re really feeling the look!

The shirt is a pretty cool find and, while its perhaps more like the shirt Han wears in ‘A

New Hope’ and it’s vaguely similar to the one he sports in ‘The Force Awakens’ it certainly helps to bring home the notion of our favourite Corellian smuggler.  This was found on Rose Wholesale (a Chinese website that sells a vast array of stuff) so I can’t attest to the quality of the products, or how secure the site is, so beware. You could also check eBay for “Mandarin collar shirt” or “Nehru collar shirt”, as these searches yield the most similar results.

The belt is a fairly decent alt for the type Han favours – his belts are two-pronged belts but three rows of holes, but this is two-pronged with only two rows of holes. I’ve opted for a black one in order to match the boots. Belts such as these are available all over eBay and elsewhere on the web so search around to see what you can find that suits your taste.

As a little extra nod to the original costume, I’ve included a brown and yellow NATO watch strap. Long time readers of the blog with know I wear a watch with a NATO strap 99% of the time and like to have a vast array in my collection in order to match them better to what I’m wearing. The colours of this particular strap were selected in order to call to mind the Corellian ‘blood stripe’ on Han’s trousers. Again, if you were opting for the “A New Hope” look, red and blue would work just as well. I’d suggest checking eBay for a strap like this as they’re relatively easy to find!

It’s notoriously difficult for men to pull off cavalry boots in this day in age. Most people see boots of this style as either costume pieces, or decidedly feminine, which is a real shame as I like the look personally, and in the winter they’re incredibly practical. In order to get around this, I’ve chosen a pair of Red Wing engineer boots which radiate vintage cool, while being simultaneously hard-wearing and comfortable. You could either be brave and wear your chinos tucked into the boots, or if you want a less eccentric option, turn your chinos up several times in order to show more of the upper of the boots.

Last, but by no means least, I’ve opted for a grey denim jacket as a reference to Han’s practical cotton number seen in the film. While many believe the screen-used jacket to be blue, it’s now more widely understood to have been a dark grey colour, hence my choice here. I have a great selvedge denim jacket in dark grey from Lee that I love, but this option is from New Look and is a much more affordable price. Again, if opting for the “A New Hope” look, a black, sleeveless, denim jacket would work brilliantly too.

What do you think to this look? Would you wear something inspired by Han Solo? Get in touch in the comments, on Twitter, or on Instagram!