It’s all very exciting and there’s lots of odd jobs still left to do, but recently I got to tick off a big part of my personal to-do list.

The other week I collected my three piece Donegal tweed suit from my tailor in Lincoln. I originally visited Andrew J Musson Bespoke in March to choose my fabric and order the suit which is a very generous wedding present from my Dad and his wife.

My first visit was rather daunting as I only had a vague idea of the sort of thing I wanted. Originally I’d planned for a Blackwatch tartan suit in a much more classical style but, upon talking to Andrew, my fiancé, and my Dad I opted for something a bit more appropriate for a winter wedding in the country.

My partner and I looked through about seven different books of fabric samples before narrowing it down to three (very different!) fabrics, one was a heavyweight wool in navy with a classic chalk stripe, the second was a brown and beige herringbone, and the third was the beautiful Donegal tweed I eventually chose.

The tweed is a beautiful flecked fabric which looks different depending on which light it’s viewed under; sometimes it looks chestnut brown, sometimes it looks more oatmeal, other times it looks like a pale brown, and other times it even reads as grey! 11th Doctor cosplayers will know that Donegal tweed has this feature which makes it difficult to pinpoint exactly what its’ defining colour is, but either way I’m absolutely enamoured with the fabric.

After choosing the outer fabric, I then needed to choose a lining; I opted for a black and red weave silk which put me in mind of the iridescent fabric that lines the 12th Doctor’s coats and felt it was another nice nod to the Time Lord.

Once the fabrics were chosen and my measurements taken it was then left to discuss, with Andrew and his father, what the suit would consist of – two or three piece? What would the lapels be like? What sort of pockets would it have? How many buttons? What sort of fit? Etc, etc!
In all honesty, there are so many facets of suits that even clothes lovers like myself don’t even consider until they’re asked. Eventually, with help from my dad, my partner, and the two wonderful tailors, we nailed down exactly the sort of suit I’d have – I opted for a three piece suit with some distinctly vintage details; the patch pockets, bi-swing shoulders, belted back, and waistcoat lapel seats it firmly in the 1930’s or 1940’s, while the overall slim silhouette helps the suit feel inherently modern and fresh.

A couple of months passed and I was called in for my first fitting and I got to see the suit in a very loose sense. As Andrew explained, the suit had come straight off his cutting board and been loosely tacked together in order to test the fit. Incredibly, the suit fit like a glove from the get-go and, barring a couple of minor alterations, just needed to be tweaked and progressed to the next stage! 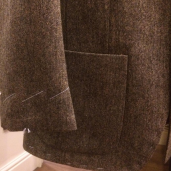 Once again, a couple of months passed and I was called in for my second fitting; this time the suit was in a much more advanced stage; everything was sewn together to a more or less finished state and it only remained to set the sleeves and attach the collar. This fitting was once again to assess whether or not there needed to be any tweaks to the fit and to ensure I was happy with how the suit was progressing – naturally I was thrilled with how it was looking and Andrew really impressed me at every fitting with how friendly and knowledgeable he is.

The two minor changes he wanted to make at this stage were that the shoulders needed narrowing slightly, and the sleeves needed lengthening by a quarter or an inch. The fact that he could spot this immediately only further cemented my confidence in his ability and I was very pleased with just how good the suit was starting to look! 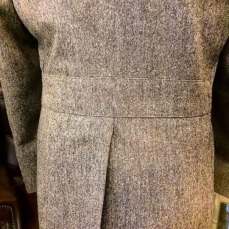 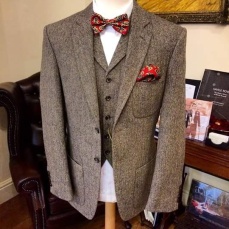 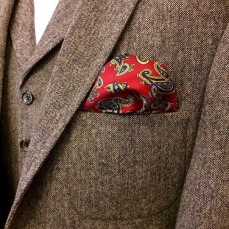 Fast forward to a few weeks ago and Andrew contacted me to let me know that my suit was ready for my final fitting and collection. The day before the fitting, Andrew tantalisingly posted several of these pictures on his Instagram account – needless to say I was practically buzzing with excitement!

When I arrived and I was presented with my finished suit I couldn’t believe my eyes; everything was perfect – every last detail was as I had described and was better than I ever imagined. It was here more than ever that I really got a true sense of the quality you received when you pay for bespoke. It’s something I’d highly recommend to any gent if given the chance.

Trying on the suit it became immediately obvious that no further work was needed; it fitted amazingly and is so incredibly comfortable that you’d hardly notice you had it on.

For the big day I originally thought I’d pair it with a white shirt and a bow tie but having tried everything together I was worried the bow tie didn’t look formal enough, so I opted for a regular tie instead. I went through dozens of ties in trying to find the right one, but eventually found a beautiful burgundy wool number from Charles Tyrwhitt. 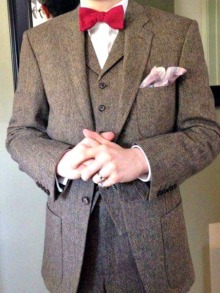 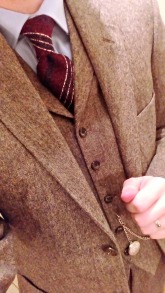 I may yet switch to the bow tie for the reception, but for the ceremony regular tie is the way to go! In addition to this, I’ve opted for a pale blue shirt and my Capaldi cufflinks. On my waistcoat I’ll be wearing my antique pocket watch that I bought over ten years ago and I have a beautiful pair of Loake oxford boots to round out the entire outfit.

What do you think? Are you lucky enough to have anything bespoke? Let me know!

One thought on “The Bespoke Experience: Three Piece Donegal Tweed”