When the War Doctor burst onto our screens at the climax of “The Name of the Doctor” fans were amazed (and confused) about his existence. Where did he come from? How did he fit into the Doctor’s time line? Was he even from this universe?

All those questions aside, fans were definitely glad that he was being portrayed by none other than veteran actor and theatrical legend, John Hurt. Hurt has a lifetime of performance behind him, so his being involved in Doctor Who was no surprise. An iconic British actor taking on an iconic British role in an iconic British television institution!

The War Doctor had everything fans could want for a one off 50th anniversary performance. He was loveable and quirky, with a depth of emotion and pain usually reserved for post 2005 Doctors.

Hurt managed to convey a wonderful combination of classic Doctor Who traits and modern eccentricities. His gruff exterior belied his tortured and sensitive soul and he was truly taken to the hearts of the audience.

It’s this old/new combination that really showed through in his costume. Mixing elements of the Edwardian-clad eighth Doctor with the rough-tough leather styling of the ninth Doctor, the War Doctor managed to tread the line between old and new. 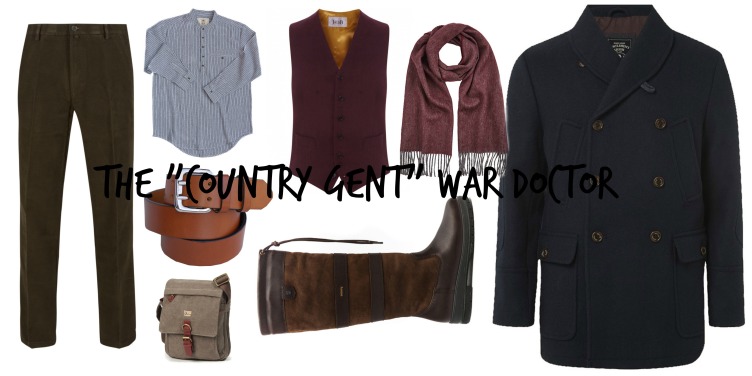 The War Doctor truly looked like a man of action. The silhouette and styling of his costume made him look every bit the unwilling warrior than the compassionate healer.

The use of military items really sells the illusion of the Doctor collecting bits and pieces as the war progresses and using them as needed.

This look breaks down some of the key styles of the War Doctors look and substitues them for modern, civilian counterparts. Menswear often takes inspiration from military uniforms and today’s high-street styles are no different.

In place of the War Doctor’s combination of boots and gaiters (the pieces of leather strapped around his calves) we’ve selected a pair of Dubarry waterproof boots. This style of boot is incredibly popular in rural parts of England and make a welcome companion in the wet and muddy countryside. They’re a little pricey, but they’ll definitely be worth the investment if you live somewhere prone to bad weather.

Alternatively, gaiters can be found in military surplus stores or on eBay if you’d prefer something more authentic. I’d advise against this as they tend to look very costumey and aren’t particularly comfortable to wear.

The trousers chosen are a beautiful pair of flat-fronted moleskins from Marks & Spencer. While it’s unclear what fabric Hurt’s on-screen trousers were, it seems likely that moleskin would’ve been selected as it’s a soft, warm, and hard-wearing material. These tucked into the boots chosen will help to capture the same overall feel as Hurt’s costume.

While the shirt worn by the War Doctor is a collared offering in a soft, rugged fabric with a subtle stripe pattern, we’ve selected a collarless (or grandad) style shirt in a slightly more colourful pattern. This is mainly down the the use of a scarf and how easily a collarless shirt layers with outer-neckwear. This style of shirt was incredibly popular among the working glasses in the early 20th century and adds a vintage style to the outfit. This shirt is from Irish Inspiration and comes in a variety of colours and fabrics.

The belt selected is somewhat similar to the one worn on-screen by Hurt and features a nice tan leather with a two-pronged buckle. This was an eBay find, but other, higher quality options are available.

Another moleskin item, the waistcoat is a rich burgundy colour and adds another bolt of colour to the outfit. Hurt’s waistcoat looks to be a burgundy-brown velvet featuring double-breasted styling and a high button stance. This, again, feels very stagey and costumey and is better substituted for a simpler, more conventional style. This one is from Jules B but cheaper alternatives can be found online or in local vintage shops.

One of the most important pieces of the War Doctor’s ensemble was the burgundy and cream herringbone scarf. Clearly the War Doctor’s scarf is tatty and worn, and fraying at the ends. In place of the knackered option worn by Hurt, we’ve sourced this beautiful (and more subtle) option from John Lewis. The tassels at the end call to mind the frayed nature of Hurt’s screen worn scarf while also remaining smart.

The War Doctor wore a bandolier in which he kept his sonic screwdriver. This is nothing more than an affectation as, even during the Time War, the Doctor never seems to have carried his own weapon – especially not one in need of ammunition that could be stored in such an item. We see the Doctor take this item from Cass at the end of “Night of the Doctor” so it could just be there to serve as a reminder of the origins of this darker side of the Doctor.

It’s entirely impractical to wear a bandolier these days so we’ve replaced this with a practical, yet rugged satchel. When worn under the jacket but over the waistcoat, this gives the same impression as a bandolier while simultaneously allowing the wearer a great deal of practicality! If it’s good enough for Indiana Jones, it’s good enough for you. This one is from Troop, a leading manufacturer of men’s bags.

If you already own a beaten up leather jacket, by all means wear it! The Wested ninth Doctor coat would work very well with this look as well of course – or, alternatively, you could choose a woolen option such as the one shown here.

The cut of such coats are all very similar – they tend to all follow the pea coat style which was popularised by use in the navy. This pea coat is by White Stuff and features a shawl collar and some beautiful patch pockets. Worn open with the rest of the ensemble, this navy offering will help to tie the whole silhouette together.

The use of heritage brands firmly routes this look in the British countryside, while also offering a degree of action-ready Time Lord.

What do you think? Would you wear something inspired by the War Doctor? Let us know in the comments!