The 1980’s were a turbulent time for those working on Doctor Who and its fans. Following on from the rocky tenure of the sixth Doctor, Sylvester McCoy was tasked with reaffirming the public’s love of the show.

While we all know how this story ended, he was the man tasked with no small feat. In order to introduce the seventh Doctor to the world, McCoy needed a more refined and sophisticated costume which simultaneously created a sense of fun and light-heartedness. It was this sense of joie de vivre which he sought to inject into his performance as the titular Time Lord.

The look selected for the seventh Doctor was one which called to mind the heyday of classical British tailoring while also feeling very 1930’s in the cut of the jacket and the use of two-tone brogues. The knitted tank top is perhaps the most gairish part of the ensemble which helps to differentiate the Doctor as a quirky time traveller. Whether or not you like the question mark motif, you can’t deny it’s instantly recognisable.

The use of textures; tweeds, silks, wools, and cottons, is absolutely inspired as it creates a rich sense of contrast without disturbing the earthy colour palette used throughout the costume. 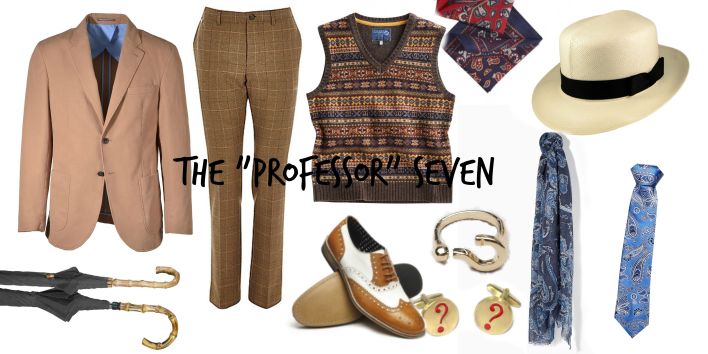 The seventh Doctor was a man who loved to accessorize and, as such, this look is full of fun little bits and pieces you can pick up and intersperse throughout your daily wear.

One of the most recognisable parts of McCoy’s outfit is the panama hat – his had the original ribbon replaced with a casually knotted paisley handkerchief but I’d recommend keeping the ribbon in place on this Olney panama. While this isn’t the best colonial panama on the market, it’s a good mid-range hat which you can roll up if you’re on your travels. Alternatively, higher quality models can often be found on eBay for less money – just be sure of your hat size before placing an order!

The tie selected is a blue paisley pattern – while McCoy tended to favour reds, oranges, and browns, it appears that blue paisley is currently easier to get a hold of – this offering from Jeff Banks is beautifully made and will help to offset the warmer tones strewn throughout this outfit. If, however, you have your heart set on something closer to the screen-worn original, I’d recommend keeping an eye open in your local charity shops as they often turn up for as little as 99p!

To match the Jeff Banks tie, I’ve selected this louche looking scarf from Mango (at the time of writing, this is available in both blue and red colourways) and will look great if draped around the neck and worn under the jacket. I found that trying to wear a scarf under the jacket lapels tends to look scruffy so wear under the jacket for a modern take of the seventh Doctor’s style.

The umbrella selected is most similar to the one seen in early promo photos for the seventh Doctor’s run. This one features a bamboo handle and will last a long time, while also making for a classic gentleman’s accessory. This one is by Farlow’s and is a truly stunning example for such a low price. If you want one that matches McCoy’s more recognisable umbrella there’s an officially licensed replica available from the BBC shop.

The other question mark motif in McCoy’s costume was the fan-favourite tank top. While again, a replica is available – this time from Lovarzi – the one selected for this look is from Joules. McCoy’s original was an interesting take on the classic English fair isle pattern and the one presented here is a good take on a classic. It’s currently out of stock at the minute, but as the weather turns cooler they’re bound to crop up again soon. Again, check local shops and eBay as there are always bargains to be had!

McCoy’s trousers were a vintage style wide fit tweed and really helped to root the look in academic fashion. The modern take on this style from River Island is a lightly textured wool blend and features a contemporary slim fit.

The seventh Doctor’s jacket was originally a belt-back safari-style jacket which was more in the mold of 1930’s tailoring than of 1980’s trends. Jackets with belted backs are notoriously hard to find these days, however, vintage options are readily available if you’re willing to pay for them. I’ve chosen this DKNY option which features a clean back, but does have patch pockets and is a nice colour match for McCoy’s screen-worn original. If you want an option for McCoy’s darker jacket, look for a deep brown wool variation.

The handkerchiefs selected are classic paisley and will look great casually stuffed into the jacket pocket and are available from Barbour – however, cheaper options are out there so be sure to check your local camping and equestrian supply stores as they often have a nice selection of larger hankies available.

Another callback to the golden age of men’s fashion is McCoy’s two tone brogues. Brogues are one of the most popular shoe styles for men and the two tone variant is a sure fire way of setting yourself apart from the crowd while remaining one of the most impeccably dressed people in the room. The pair shown here are a relatively low budget option from Skye Clothing – I own some of Skye’s other styles and the construction is stunning, especially when considering the £50 price tag!

Lastly, I’ve selected a couple of question mark themed accessories to help tie the look back down to the seventh Doctor. The cufflinks are available on eBay and are a real bargain at £5.59! The ring, too, is an eBay find and is dirt cheap (priced at only £1.99 with free postage). When worn all together, these accessories – along with the complete outfit – will make a great, if subtle, reference to the loud-yet-refined look sported by the wonderful seventh Doctor.

What do you think? Is this a look you would wear! Let us know in the comments!

One thought on “The “Professor” Seven”