Regular Doctor Who viewers will be aware of the upcoming changes to Peter Capaldi’s wardrobe as the title character. Originally portrayed as favouring crisp shirts with a minimalist punk-meets-mod style, the twelfth Doctor has recently been photographed in variations of his “Last Christmas” look.

The multiple costume variants imply that this is Capaldi’s current favourite iteration of his Time Lord style and it seems we’ll be seeing quite a lot of this in the upcoming series 9.

The original version of the more relaxed twelfth Doctor look featured his Paul Smith holes jumper and a very thin All Saints hoodie. This slightly careworn outfit harks back to the classic era of Doctor Who when Patrick Troughton was renowned for his shabby-chic wardrobe. 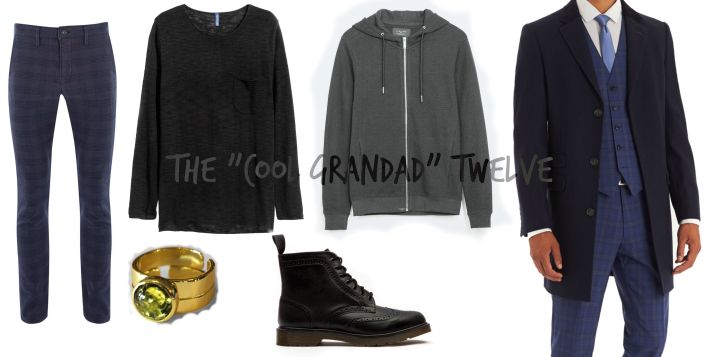 Inspired by this, the items presented here create a comfortable layered outfit which has that slouchy, “cosmic hobo”-esque look Peter Capaldi is going for of late.

The two most important elements of any version of Peter Capaldi’s Doctor Who look are the boots and the coat. It’s widely believed that the coat worn by the twelfth Doctor on the show is a custom job, however, the Crombie style and covert cut are fairly commonplace these days and similar coats can be found with ease. The one pictured here is by Moss Bros. and features a herringbone weave in a beautiful dark blue (a similar colour to the one worn by Capaldi).

The coat also has a nice deep red lining which is a nice reference to the twelfth Doctor’s original on screen coat. Currently this one is on sale with only a few larger sizes available, however, Moss Bros. and other high street retailers have many similar styles available – more and more so on the run up to winter.

The boots, while remarkably similar to the ones worn by Capaldi on the show, they’re actually the Doc Marten’s equivalent to the Loake boots he prefers. They’re currently on the DM website for £130 in limited sizes. However, they can be found through certain online retailers with a little perseverance.

The important thing, to my eye, with the twelfth Doctor’s look, is that your boots or shoes have an “airwair” sole – this is what’s widely recognised as the Doc Marten’s style of sole but they can often be found on cheaper shoes and boots too. So long as your footwear features this type of sole, you’ll find that they have a nice, chunky, Capaldi feel. These shoes I found on eBay have a great twelfth Doctor feel, and for only £24.95, they’re an absolute steal.

The jumper pictured here is by H&M and features a relaxed and slouchy fit which somewhat replicates the feel of the original Paul Smith holes jumper. If, however, you wanted to try to reproduce your own PS style jumper, a cheap black jumper and scissors can yield some satisfying results – but bear in mind the holes will eventually fray and unravel. Personally, I prefer the comfortable look of these jumpers sans holes, but that’s just me! Magnoli also offers a very faithful replica of the jumper for those that are looking for an exact match.

The hoodie offered here is a lightweight grey number from Zara. It’s widely understood that one of the hoodies the twelfth Doctor sports in series 9 is a similar grey colour and so is an incredible versatile piece to add to your wardrobe. The fabric is use has a nice texture which helps to elevate the the outfit without detracting from the muted style of the look.

Other hoodies can be used and you may already have one tucked away in a drawer. The main detail of Capaldi’s hoodies is that they’re made of a lightweight material so they drape in an unusual way. This also allows for a more comfortable layered outfit.

It’s also been widely documented that Peter Capaldi wears a lot of loudly patterned trousers in the upcoming series of Doctor Who and the ones presented here feature a slightly subtler pattern and a slim fit. They perfectly reference the ones Capaldi seems to have grown so fond of recently, though being from Topman, I’d suggest you size up slightly, as they tend to favour the “sprayed on” look for men’s trousers…

Lastly, the ring featured is a very close replica, again by Magnoli, which is remarkably close to the one worn by Capaldi on the show. That said, the main difference is the design of Magnoli’s ring(s) is that they’re the expandable type, to better suit most customers. On top of this, I found a similar “double effect” ring on Etsy for less money, but in silver. I own a ring from this same seller the the craftsmanship is impeccable. While the ring is more of a costume piece, it’s undeniably a beautiful piece of jewellery which would make a welcome addition to any man’s collection.

When worn together, all the pieces of this outfit will serve to make a twelfth Doctor-esque silhouette which will feel comfortable and relaxed to wear, while simultaneously looking 100% rebel Time Lord. Substitute the jumper for a faintly printed t-shirt and you can capture the look of some of the other series 9 costume variants as well.

With the trousers, boots, and coat, you can also pair this look with a cardigan and a white shirt to create a good series 8 twelfth Doctor look. I’d also advise you to play with colours with this outfit, as the darker hues can make for a somewhat drab outfit, so adding one strongly coloured element can really help to lift the entire look.

What do you think of this look? Do you like the shift in Capaldi’s Doctor Who look, or do you prefer his original costume? As ever, be sure to post your favourite Doctor Who inspired looks and comment with your suggestions!

2 thoughts on “The “Cool Grandad” Twelve”